HomePod is the smart speaker born at Apple, at a price lower than ever. Buy your Apple HomePod now with a discount!

Sort by:
Best sellers Relevance Name, A to Z Name, Z to A Price, low to high Price, high to low
Showing 1-5 of 5 item(s)

A few years ago Apple entered the realm of speakers with the launch of Apple HomePod , without a doubt, a revelation with its cylindrical body and its deep and clear sound with immersion capacity. It was one of the most purchased products of the brand in 2018 and since then they had not been renewed, however, they continued in the arena as one of the best quality and output products. Recently and around the promotion of the new iPhone 12 , Apple took the opportunity to also launch its mini version of the HomePod, a product of the same quality, with the same capabilities but in a more practical and portable size. The HomePod mini is a smaller version of the well-known Apple HomePod speaker design, it has a rounded figure model, smaller dimensions and a much cheaper price than its predecessor. If you want to know more about the Apple Home Pod and Homepod Mini speakers and their main features and differences, do not miss all the information that we bring to you in this article .

Apple's HomePod was its first model of speakers that the company designed , it is characterized by being a cylinder 17 cm high by 14 cm wide. It was created with 7 tweeters with their respective amplifiers to maximize and filter the sound. The resonance it emits is clear, deep and of great quality. The model has embedded microphones and a wide source of audio compatible with other devices. The device is adapted to work with the Siri interface that is located at the top inside a touch area that is covered by a speaker mesh. The model originally comes in white, but the design is also presented in black. 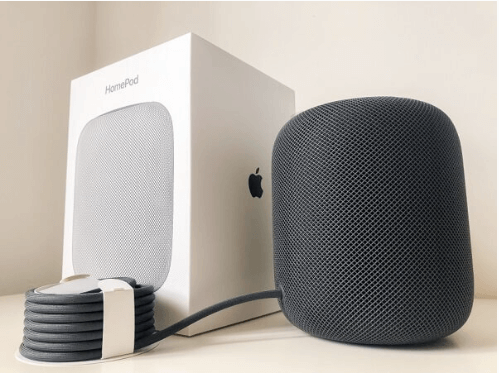 Main features of the HomePod

With the intention of outlining each of the speaker models available from Apple, we have listed the main features they have, starting with the HomePod.

As mentioned above, the pioneering version of Apple is tall, robust and moderately heavy. It is 17.2 cm tall , 14.2 cm in diameter , and weighs about 2.5 kg.

Part of the great resonance of the HomePod is due to the fact that it has an internal microphone to further amplify the sound of the bass tones. In addition to this, it has another 6 adapted abroad.

The command options are subject to Siri, if you keep the board pressed you activate the interface. With one touch you can play the music and with another pause it. If you press 2 times you go to the next song and if you press 3 you go back to the previous song. The volume is controlled by the + or – buttons (touchpad) that you must hold down to raise or lower respectively.

The HomePod has Bluetooth 5.0 and 802.11 ac Wi-Fi connection with which it can be linked to all Macs and other Android devices. 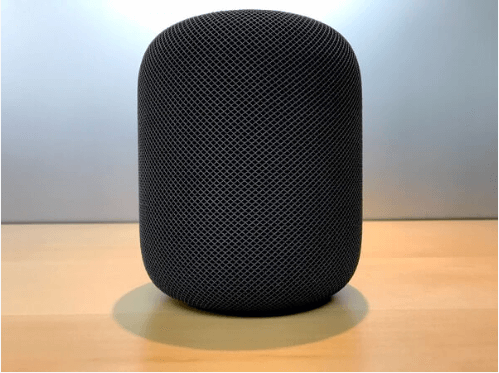 The small version of Apple's HomePod is much more versatile and practical due to its small dimensions , this time the company chose a different model from the previous one, compressing the original size of the equipment to almost half. The Apple HomePod Mini was then 8.43 cm high and 9.79 wide, more than 10 cm apart from the first version . Unlike its older brother, the HomePod mini does not have a cylindrical figure but a rounded and flattened shape at the top where the touchpad is located where it connects to the Siri interface, very similar to the HomePod board. As a consequence of its more modest dimensions, the weight has also changed and now the Apple speaker weighs only 345 grams. being one of the lightest in the entire market. All this without diminishing its power and capacity.

Now we will talk about the main features of the Apple HomePod Mini to identify what are the most striking differences with its previous model.

The HomePod mini is smaller and lighter than the HomePod. Its weight ranges from 345 grams and its height is practically half the original size, reaching 8.43 cm and 9.79 cm wide.

The sound of the HomePod mini is still powerful and lucid, it has a speaker with an acoustic structure called “ Waveguide ”, as well as passive radiators for bass tones. It fully filters the tones, transmits them clear and amplified.

The HomePod comes just like the original version with an internal microphone that amplifies and enhances voice tones . It also has 3 more microphones immersed.

At the top it has a speaker mesh where the Siri interface works , to activate it you just have to press the surface. As for the direction options, if you press 1 time you can pause or resume the music, with 2 touches you change the song and with 3 you return to the previous music. The volume is directed by the buttons (touchpad) of + or – keeping the space pressed.

This new model also has access to all the music and audio playback applications that the company has available for the device. Apple Music , iTunes, iCloud Music Library, Apple Podcasts, Apple TV, Mac AirPlay, Radio, other iPhone, iPad, or iPad Touch sound sources.

If we compare both devices, we will obtain the same results: a high-end product that exceeds the expectations of Apple users. However, it is impossible not to make the comparison, especially of the new design, for this launch the company has chosen to offer a more compact, round and smaller HomePod mini . A design quite far from the original model. This new and improved version makes the equipment more portable, easy to move and place in any space , whether it is an open space or inside a room. Its clean sound will fill any space with ease. In addition to being able to be placed on any surface, it is also more comfortable to mobilize a device as light as the HomePod Mini instead of the heavy speaker of 2018. Many people consider that minimizing its size will also reduce the power of the device, however Apple has ensured that this is not the case and with the internal structure that the HomePod Mini microphones have, the sound travels in a 360 ° direction for a better experience . Despite having fewer amplifiers than the original HomePod model that has 7 speakers, it is compensated by passive radiators that spread the bass tones to enhance them. Likewise, the brand has decided to incorporate an Apple S5 Chip that is used to analyze the sound, applying certain adjustments to the volume, controlling the vibrations and the dynamic ranges of the voices. With this device, you can also form a stereo band by joining it to other similar devices, a feature that it shares with the HomePad. But among the incredible functions of the HomePod Mini and that undoubtedly makes it stand out from the old one, is the intercom mode it has, it is a function that links the sound of one HomePod with another and with other Apple devices such as iPhone or iPad. This is an awesome feature if you want to make general family announcements like dinner time, or calling the kids. You can also use it for home control by linking it to smart devices like your thermostat, lighting panel, or locks with the help of Siri. 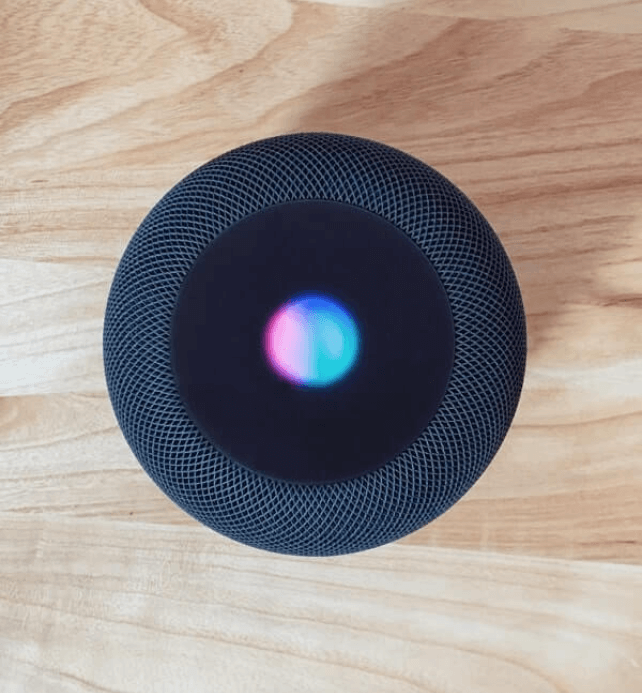 How much do HomePod and HomePod Mini cost?

One of the most relevant differences in Apple speakers is undoubtedly their price. When the HomePod came out almost 2 years ago, its launch price was 349 euros and it still flew out of the stores. Now, its mini version is much cheaper. As you can see, Apple has played with the dimensions, accessories and functions to be able to make a much cheaper product than the first one it launched, and around the launch of its new iPhone they make sure that both are an incredible acquisition.

What are the colors available for the new HomePod Mini?

As if that were not enough, the beautiful model of the new HomePod mini, Apple's small stereo, comes in the original colors of the brand: the classic black and white , but now a new tone has also been added, which is space gray , just like classic for the brand.

Largely Amazon and Google speakers are to blame for Apple now seeking to modernize its old model, seeking to far exceed all stereos available on the market. Therefore, it is necessary to compare the HomePod Mini not only with its predecessor but also with its fiercest competition. Making a comparison of general features we can deduce the following: The size of the Apple HomePod Mini is much smaller than that of the fourth generation Amazon Echo devices and the Google Nest Audio, of the latter it is practically half as small in height and diameter . It is also the lightest of all the teams. Its interface is Siri, well-known on the market , while the competition's commands are dictated by Alexa and Google Home, respectively. As for the sound, it is a bit unfair to make a comparison, because as it is a mini version, it has fewer accessories such as microphones or tweeters to amplify the tones. In this case, the amplitude of the Amazon Echo and the Google Nest are superior. The 3 teams have several microphones that serve to filter voices and bass tones, especially the HomePod has one that provides a 360 ° vibe traveling from inside, up and down and sides. Both the HomePod Mini and the Google Nest Audio have a touch panel for their controls , which provides a more modern and delicate image. The Amazon Echo still has a button design. Finally, the price of the 3 speaker models is exactly the same, it is up to the customer to choose according to their experience with the brand. However, the HomePod Mini has shown clear advantages in terms of quality, strength, and power.

Apple will never stop improving its products, each generation seems better than the previous one and they come with improvements that do not stop capturing the attention of their users, this time the HomePod Mini becomes almost an assistant for housework . It also becomes an intercom to keep you connected with the people who are in your perimeter, a stereo to set any room with ultra-sensitive sensors that study the room and its dimensions in order to adjust the ideal volume. And of course the price, accessible, modest and that makes it one of the best alternatives in relation to price/quality . Get your HomePod Mini and enjoy the music experience!