The new Apple Watch is here, we are talking about the Apple Watch Ultra, a high-end smartwatch that brings amazing news and perfect applications for the most experienced adventurers. And now at Shopdutyfree you will find it at the best price on the market.

In September 2022, Apple introduced the Apple Watch Ultra , which is a high-end variant of the Apple Watch that has been in development for years. Aiming to take on smartwatches from more expensive companies like Garmin, this model is aimed at sports enthusiasts and athletes who need longer battery life and superior sports performance from such equipment.

According to Apple, the Apple Watch Ultra was built for endurance as well as exploration and adventure, and is the largest Apple Watch yet at 49mm, which is 4mm larger than the Apple Watch Series 8 . of 45mm to which it accompanies.

How is the Apple Watch Ultra?

Features of the Apple Watch Ultra include the first redesign in years with a lightweight aerospace-grade titanium frame, a flat sapphire crystal face , which has a larger diameter and a deeper groove in the Digital Crown , the side button housing and an additional hard key on the left side called the Action button.

intensity of up to 2,000 nits , the Apple Watch Ultra will be the brightest Apple Watch to date, making it easy to see in sunlight. Plus, it can be customized so you can turn on workouts, mark intervals, set compass waypoints, and much more.

Without a doubt, the three built-in microphones help improve sound quality, and thanks to this a beamforming algorithm picks up the voice and at the same time reduces background sounds, even in noisy environments. It has an 86 decibel siren to summon assistance if needed, with two SOS patterns. 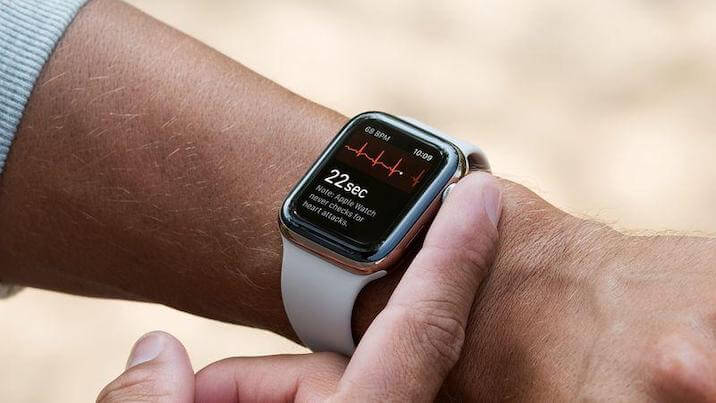 There are a number of advantages to Apple Watch that make it superior to other smartwatches. This line belonging to the Apple company has proven to be at the level of great athletes and users who seek to satisfy their strictest needs.

In this way, they are articles specially designed to cover activity logs and designed to be a permanent companion on the user's wrist.

All the news of the Apple Watch Series 8

Likewise, the case has been extended towards the edges with a new flat front glass screen to offer additional protection, in addition to the Digital Crown as well as the side button being now located in a raised area of the case.

To facilitate accessibility even when wearing gloves , Apple has modified the design of the Digital Crown, giving it a larger diameter and elongated grooves, and the side button can also be used with gloves.

This means that, for a long time, the right side of the Apple Watch incorporates a Digital Crown and the corresponding side button. While on the Apple Watch Ultra there is an additional "Action" button on the left side that can be customized by the user. This key is bright orange for easy viewing, and is used to launch workouts and apps.

It is a lightweight and durable material that is also corrosion compatible for use in water. The back of the Apple Watch Ultra is made of ceramic with sapphire glass, like the Series 8.

Thanks to the larger 49mm case , Apple managed to fit in a larger battery. Apple Watch Ultra lasts up to 36 hours on a single charge, while with the new low-power setting , 60 hours of battery life is possible for multi-day adventures.

With this, the battery life time has been enough to complete a long-duration triathlon race that includes 3.5 km of swimming, 112 km of cycling and the entire 26.2 km marathon.

This watch features a dual-frequency GPS, since it integrates the L1 and L5 frequencies, as well as new location algorithms. It offers the most accurate GPS of any Apple Watch , meaning accurate distance, pace and course data for training and competition.

In fact, Apple Watch Ultra has a unique "Wayfinder" face with a time face that can be turned into a compass, and holds up to eight complications. Night mode built into the Wayfinder dial improves visibility in the dark. To activate the night mode you have to turn the digital crown.

Apple also decided to design a special watch face for the Apple Watch Ultra, which has a built -in compass and supports up to eight complications. The watch face can be customized for the mountain, sea or trail, which also turns red at night, allowing better visibility.

In addition to this, the Apple Watch Ultra has the Compass Waypoints system and the Backtrack function, through GPS, generates a trajectory showing the places traveled by the person, which helps to return to the origins in case of loss. 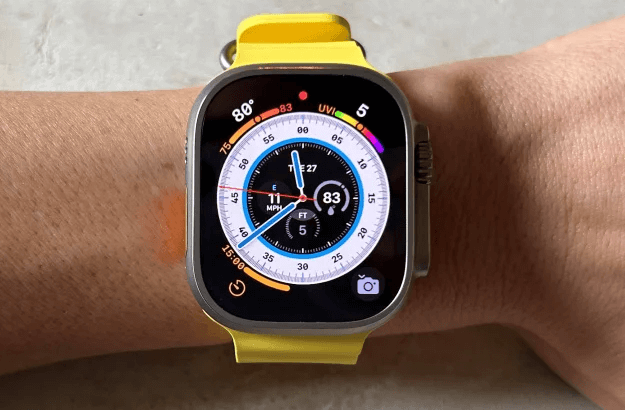 In order to adapt to more extreme environments , the Apple Watch Ultra can withstand more temperatures. Indeed, withstanding conditions as cold as -20° C (-4 degrees Fahrenheit) and as hot as 55° C (131 degrees Fahrenheit). It is also certified to MIL-STD-810H, a metric used for military equipment and rugged equipment manufacturers.

Thus, as it is a watch designed especially for exploring and adventuring , the Apple Watch Ultra is compatible with much more extreme temperatures than those of the standard Apple Watch model.

In addition, it is MIL-STD-810H certified , a standard that applies to military equipment and is used by manufacturers of rugged equipment. According to Apple, these tests include low pressure (altitude), high temperature, low temperature, temperature shock, fluid contamination, humidity, immersion, sand and dust, freeze/thaw, ice/freezing rain, shock and vibration, among others.

When it comes to water sports, the Apple Watch Ultra can also support kitesurfing, wakeboarding, and recreational diving, which are not recommended activities among standard Apple Watch models.

In this area, the Apple Watch Ultra has received WR100 and EN 13319 certification , an internationally established standard for diving accessories. When used for diving, the Apple Watch Ultra has the watch depth meter and the dedicated Depth app, which shows how deep you are diving, as well as the temperature of the water (using the new temperature sensor), dive time and maximum depth reached.

This version of the Apple Watch Ultra is conveniently equipped with the same sensor as the Series 8, which measures the temperature of the water , and also serves in fertility planning for women. This improves cycle tracking and makes ovulation estimation retrospective.

In addition, through LEDs Green, red and infrared lights are projected onto the blood vessels in the wrist, with photodiodes measuring the amount of light reflected. Apple's algorithms then calculate the color of the blood, which is an indicator of the amount of oxygen present. On the Apple Watch Ultra it is possible to measure blood oxygen between 70 and 100 percent.

Blood oxygen can also be measured on demand using the Blood Oxygen app , and blood oxygen measurements are taken in the background when the wrist is not moving and the watch is used for sleep tracking.

For its part, the Ocean Band is intended for risky water sports and includes a transparent fluoroelastomer that allows it to be adjusted to neoprene suits.

The best store to buy the Apple Watch Ultra

You will find the best prices online at Shopdutyfree.es . You can see on the page all the available models and a range of accessories to choose from. As an optimized website, it makes it easy to purchase items from the comfort of your home in minutes.

Are you ready for your new Apple Watch Ultra?

With the Ultra, the product arouses interest because it is so different from previous Apple Watches. And is that if there is any doubt in the common sense that maximalism is already fashionable, just look at the Ultra.

Also, its position in Apple's updated range of smartwatches is higher than the Series 8 and the newly revamped entry-level Watch SE. In this sense, the Series 8 watches are the best iPhone-compatible smartwatch for most people, while the Watch SE is the most sensible option for budget-conscious buyers.

Instead, the eye-catching Ultra is aimed at a niche market that well-known companies typically target: outdoor adventurers.